Ask Tek Marciniak why he joined the Sheriff's Department as a reservist and he will tell you that police work fulfills a basic need in him. Part of that need is a desire to contribute to the community. If you're going to do community service, Marciniak figures, you might as well do it in an area of expertise. Have no doubt that Marciniak has expertise in law enforcement. Besides serving on the Tampa Police Department and running his own detective agency for years he was also a constable in his native Scotland and a military policeman in the Marines. 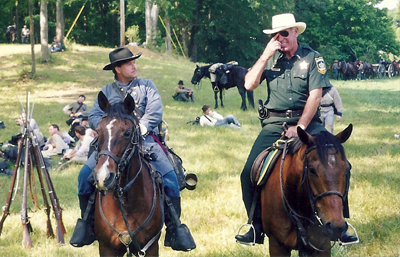 Equal to the desire to contribute to the community, however, is a need for personal challenge and adventure. Call it risk taking. It is a characteristic that appears to have motivated and defined Marciniak most of his life.

"The kicker is the same reason as when I was 21 or 51," Marciniak says. "You like to be on the inside as a participant rather than on the outside as an observer. We like to be in on the game...It helps fulfill in me a certain search or desire for excitement, I suppose. Beyond the physical involvement, it's taking it close to the edge. The element of danger and achievement appeals to me."

It's the reason, he says, why he prefers fox hunting and endurance riding to show riding. It's the reason also why he is an airplane pilot, a certified scuba diver and why he once rode across the Andes Mountains on horseback.

Finally, it has to do with the comraderie he experiences being a law enforcement agent again.

"I missed the comraderie that had been with me in t he Tampa Police Department," Marciniak says. "It's a marvelous feeling to feel it again when I thought it was gone."

Consider Marciniak's background. Born in Scotland of a Polish father and a Scottish mother, he was raised Catholic, which didn't make for an easy boyhood in mostly Protestant Scotland.

Graduating from the Scottish National Police Academy in 196, he worked as a constable in Dundee, Scotland, for a while. But this was in the 60's, when the Beatles and Rolling Stones were setting the trends and San Francisco was the place to be. At the same time, the United States was getting heavily involved in Vietnam. While many American youths were fleeing the country to avoid the unpopular war, Marciniak decided he wanted to come to the United States and join the Marines. And that is what he did, including marrying an American in order to qualify for his Green Card. (He and his bride stayed married for seven years and had a son.) 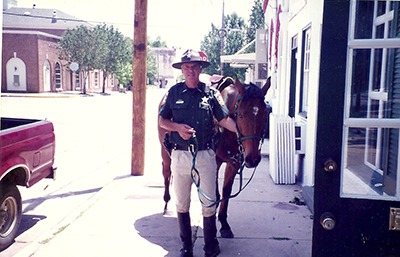 After serving in the Marines, Marciniak joined the Tampa Police Department. But convinced after three years that he wasn't going anywhere, he started his own detective agency, which eventually grew to 14 investigators. Meanwhile, Marciniak attended the University of South Florida and earned a degree in anthropology and archeology.

Tiring of the agency in 1990, Marciniak sold the business and bought a 50-foot sailboat, which he used to teach off-shore sailing and to conduct combination sailing archeological expeditions to Mexico, Honduras and other Latin American countries.

It was a job offer to his wife that brought the Marciniaks here (Jefferson Co., FL) in 1995. where they bought Trelawn Plantation with the idea of making it an inn for fox hunters. Marciniak's latest venture was the recent Celtic Festival, which proved successful beyond expectation. Already, he is planning for the second festival. Meanwhile, times when Marciniak isn't operating his business, giving his horses a workout, or planning his latest (ad)venture, he may just as well be seen in a sheriff's car, patrolling the county.